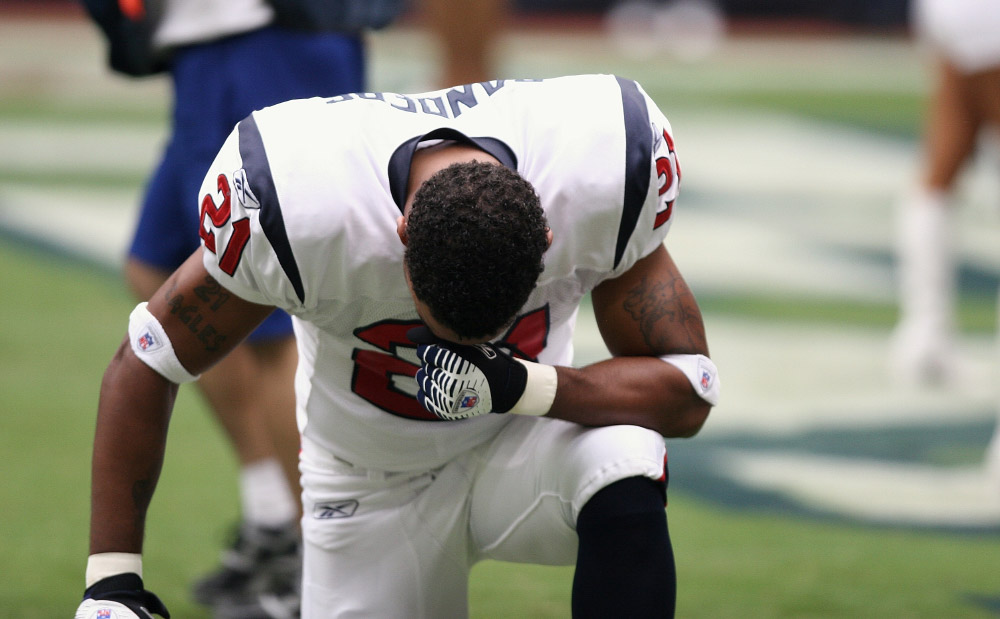 I have had a disagreement with a few friends over the business of “taking a knee” at public events.
Sport has been one of the great healing realities of our age. And what has been ruining it are three things: drugs, politics, and money.
Kneeling is about politics. And my main reason for disagreement is that one man’s knee is another man’s salute.
In other words, “taking a knee” for something you personally disapprove of may be an attack on something others personally favor (like their country). But a kneeler decides for personal reasons to over-ride that possibility for his or her own moral purposes. So from this perspective, kneeling is actually a form of moral bullying.
After all, who am I, or anyone, to commandeer a public event everyone came to enjoy free of unpleasantness, and turn it into a caustic and divisive moral war? Taking a knee, besides being a personal and partisan move, as I say, is morally-insulting to those who may sincerely support whatever the kneeler happens to disapprove of, but are simply too well-mannered to convert into a public quarrel.
I knew Tommie Smith and John Carlos, who gave the black-glove salute on the Olympic Podium in Mexico City in 1968. I completely understood their concerns as black citizens upset with American life at the time (although they were then very privileged black citizens attending a major university free of charge, who attracted lucrative sponsorship interest). And I told them afterward, once back at San Jose State where we all trained, that I thought they made a selfish move that imposed their personal political views on everyone else, and broke the “Olympic Peace” – the understanding that at least once every four years, for just a couple of weeks, all the fractious nations of the world can get together to enjoy bonding in the love of sport and just keep their mouths shut.
I have no problem with violence-free protesting. In a free society, individuals who can attract a crowd to hear their grievances and aspirations are free to do so. But sport-kneelers did not attract a crowd to hear them complain. The crowd paid money to watch them win or lose at their sport.
So you could argue – I do – that kneelers are being dishonest; they are moral bullies, unashamed of deceiving an audience that came to watch them perform by imposing on them – stuck in their seats as they are – a different performance than the one they came to see.

Quebec Has No Right to Separate!

A Letter On the Difference Between Culture, and Multiculturalism